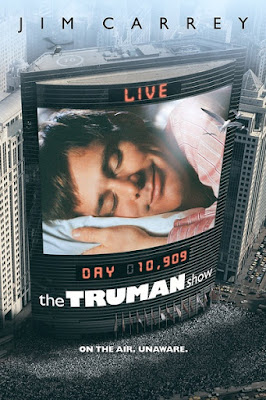 Summary:
He doesn't know it, but everything in Truman Burbank's (Jim Carrey) life is part of a massive TV set. Executive producer Christof (Ed Harris) orchestrates "The Truman Show," a live broadcast of Truman's every move captured by hidden cameras. Cristof tries to control Truman's mind, even removing his true love, Sylvia (Natascha McElhone), from the show and replacing her with Meryl (Laura Linney). As Truman gradually discovers the truth, however, he must decide whether to act on it.

Review:
Imagine your whole life, your entire existence, is the subject of one hit sitcom? Your every move broadcasted 24/7 for the world to see. Your whole world a giant film set from which you unknowingly cannot leave. Everyone around you following a universal script line for line. Well this is the reality for Truman Burbank. What an original and incredibly cool premise for a film! I love it.

This idea is executed so well. We follow the life of Truman and live it as he is living it until it is soon revealed what is really going on. The town in which he lives is so picturesque – too perfect. It’s always a lovely day. The colours are so bold and eerily cheerful. It almost looks like a 50s advertisement for the ideal life. Jim Carey is fantastic. He brings out the laughs in his quirky way, while inspiring huge empathy for his character. 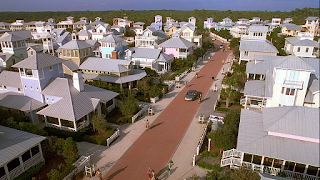 The executive producer of the show acts like god. He has followed him from birth, even before birth, right the way through his life to where he is now, controlling his world, making decisions for him, manipulating him. It’s creepy but equally fascinatingly genius.

The use of camera angles reveal even before we know the big picture, that all is not as it seems. The film is shown to us as an audience, the way it is shown to the audience within the film through the hidden cameras. In its simplicity, it’s very clever. I also love the moment where a massive light falls down in front of him. We're still a bit uncertain at this point whether our suspicions are worth going with, and this only adds to them.

The film is so thought-provoking that it stays with you after the credits – always the sign of something special. I find the concept so fascinating. I’m sure many of us have imagined our own life as such for the fun of it as a child – one massive script being filmed and watched from a higher entity we know nothing about. One big board game being played by entities we will never see.

Of course, the film asks a lot of us in the way of suspending belief. Why would one person go to the trouble of capturing somebody’s entire existence for the sake of a tv show? Why build this whole world in the first place? And for so many to go along with it? It’s so mad it’s almost psychotic.

There are some beautiful shots in this film as well. Particularly within the final moments. The colours and positioning are so picturesque, it's almost dream-like. It's really pretty. 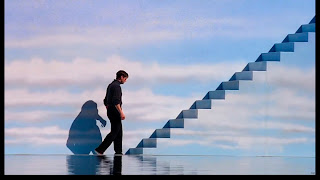 Underneath all the bold and bright colours and smiley expressions of Jim Carey, there’s something far more sinister lurking in this story if one’s mind is allowed to wander far enough. This is why I loved this film so much. It seems to be equally disturbing as it is uplifting.

A fantastic film that’s so worth watching. One of the better ones out there for sure!